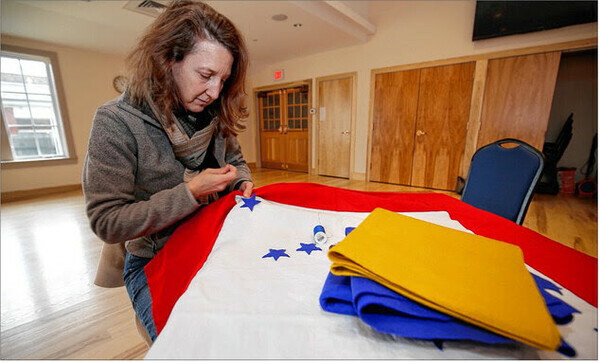 First I would like to start by saying thank you to all the veterans and those of you who honor and listen to our veterans, as well as all the families and friends who help to support those who have served.

My name is Rebecca Fricke.  I have lived in Amherst for 15 years.  I have many jobs, but I am also a fiber artist which means that I make art with fabric.  For the last four (or so) years, I have been part of a group of Western Mass fiber artists who work, learn and put together an annual exhibit.

Our next show will be in the spring of 2016 and we will be doing work that relates to objects in the Amherst History Museum collection.  For those of you who don’t know, the Amherst History Museum is in the Strong House next to the Jones Library.  During my museum tour I was struck by many of the objects I saw, but one of them stood out and that was a banner which was made by the North Congregational Church members to recognize their fellow congregants who served in World War I.  On the white and red banner there are twelve blue stars representing men who served during WWI, three blue stars with red crosses representing nurses or medics and two gold stars representing men who died in service.

Seeing the banner started me thinking about the veterans of Amherst who were not part of that congregation.  How many of them were there?  Were they honored and memorialized?  Then I began to think about how hidden our vets can be today.  I wondered if I were to make a banner the same size and shape as the one in the museum, and if I sewed blue stars on it to represent all of the veterans from Amherst both living and dead how many stars I would need to sew?  Would the flag be full?  If I included veterans from all the major conflicts like the Civil War and World War II, would I run out of room and need to make another banner?

A few months ago I asked Steve Connor for help.  I asked him, how would I go about getting the number of veterans from Amherst who have served?  He said, you start asking people.  And so, as 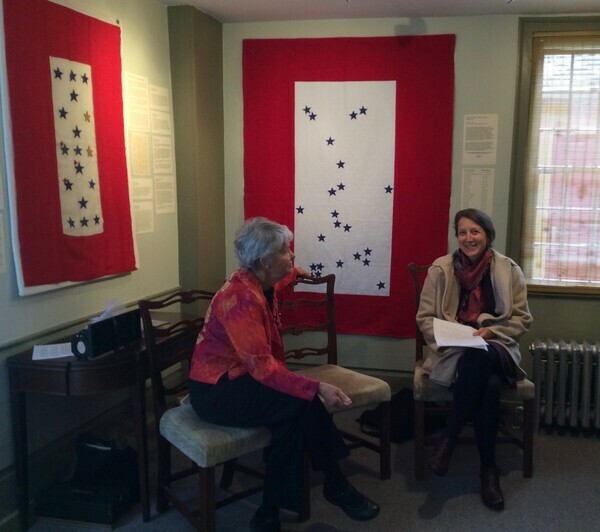 of today, I am asking you for help in answering the question - who from Amherst has served?

This is an art project and an exploration of our history.  This as a learning project for myself and for the Town of Amherst.  This is a project that will develop as I collect names and dates, but I am hoping to have it hanging in the museum by late spring.  It won’t necessarily be finished, but I will add on to it as I collect names.  If you are interested in having a star sewn on the banner to represent yourself or someone you kn ow, or you are able to help me collect names of Amherst veterans, please contact me.

If you consider yourself “from Amherst” and you served, then I will sew a star for you.  Please email me at: Bedscapedesigns@gmail.com