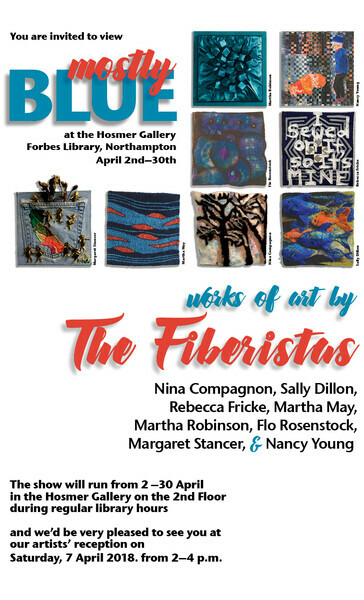 Working my way through "my" stash!

Well,, half way through the cutting and sewing I realized I was really using someone else's stash that I agreed to take at some point a few years ago.  I am not sure why I found that funny and less satisfying, but such is life.  Does someone else's stash immediately become "yours" upon acceptance?  Probably.  I made these two small quilts for my cousin's two little girls.  I have heard that they love them and they can easily tell them apart. 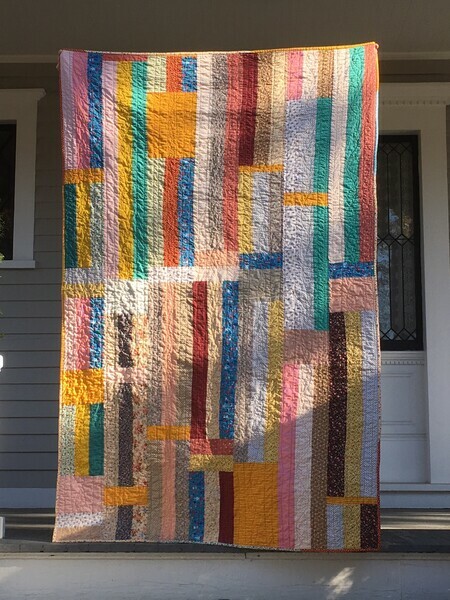 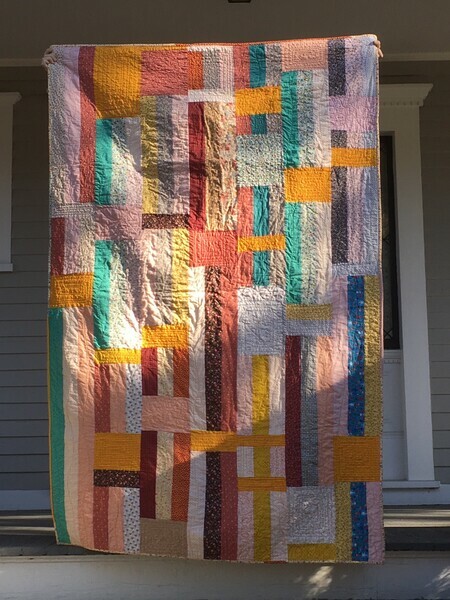 This year’s UUSA Raffle Quilt, “In the Pink" was designed with community in mind!  Simple 9” grey blocks with a wonky pink corner were on offer to make and a number UU Congregants chose their own fabrics and pieced 8-12 blocks each, bringing them together for a Quilting Bee in mid-September.  The result is this delightful 94”x102” (Full/Queen) quilt, which the UU is raffling to support its environmental, community, advocacy, and social justice programs. 100% cotton fabrics/batting; block design by Rachel Peterson, quilted by Rebecca Fricke.  Drawing for this quilt will take place at the Annual Stone Soup Bazaar, December 2nd, 2017 at 3:30pm - Winner does not have to be present to win! 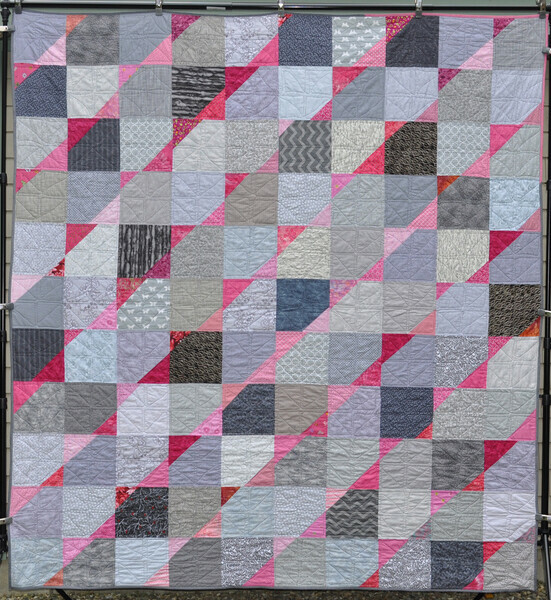 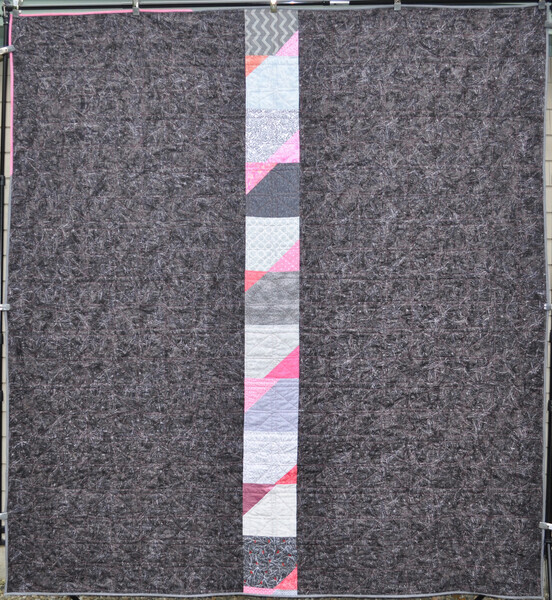 Impressions: Recent Work by the Fiberistas 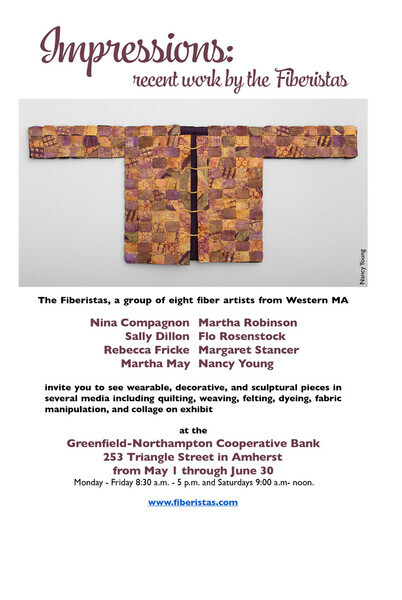 Quilt Graffiti - What would Emily have written on a quilt? 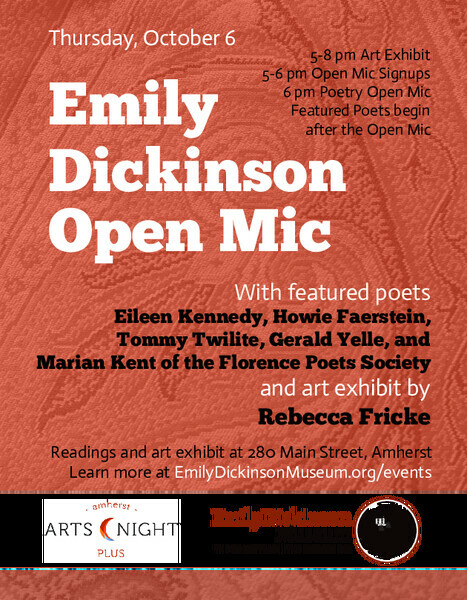 If you would like to have a star sewn on for yourself or a family member please email me at bedscapedesigns@gmail.com.

Thank you for your support,

AMHERST — Behind each star lies a name and a story of service.

In an effort to honor local veterans, Rebecca Fricke, 48, of Amherst is meticulously stitching blue and gold fabric stars onto a redand- white flag. So far she has about 20 people interested in being represented, and she hopes that number will grow.

“My only criteria: They consider themselves from Amherst and they served in some capacity,” she said, sitting and sewing at the Unitarian Universalist Society of Amherst on a recent afternoon.

The blue stars represent veterans of any era, while the gold stand for those who died in service.

Fricke and fellow members of the Western Massachusetts Fiber Artists are planning an exhibit at the Amherst History Museum that will run from May through September, full of artwork inspired by items in the museum’s collection.

Fricke said she was moved to begin her flag after seeing a World War I service banner made by the North Congregational Church. The flags, which first came into use during that conflict, are traditionally hung in windows to honor a family member serving in war.

“Wouldn’t it be cool if I made a service flag for all of Amherst?” she recalled thinking when she saw the museum piece, noting that more than 500 veterans currently reside in the town."

For the rest of the article please go to the Daily Hampshire Gazette - Wednesday March 23 Section B.

Rebecca Fricke, of Amherst, sews blue and gold stars on a banner to honor veterans last week at the Unitarian Universalist Society of Amherst.

Stephanie McFeeters can be reached at smcfeeters@gazettenet.com.

Amherst: ‘All in this together’

..."Rebecca Fricke, a legislative aide for State Rep. Ellen Story who is also putting together a fiber arts show for the Amherst Historical Society, told the crowd she plans to honor veterans with the creation of a flag reminiscent of one made by women at the North Congregational Church in Amherst after World War I. That flag has blue fabric stars sewn onto a white field to represent both veterans and those in active service."

After the ceremony on the North Common I went to the VFW and collected about 20 names of Vets who served in Germany, Korea, Vietnam, Iraq and Afghanistan. Thank you for sharing your stories with me while you were signing up for a star. I see a lot of blue stars in my future.

First I would like to start by saying thank you to all the veterans who are here today and those of us who are here to honor and listen to our veterans, as well as all the families and friends who helped to support those who have served.

My name is Rebecca Fricke. I have lived in Amherst for 15 years. I have many jobs, but I am also a fiber artist which means that I make art with fabric. For the last four (or so) years, I have been part of a group of Western Mass fiber artists who work, learn and put together an annual exhibit.

Our next show will be in the spring of 2016 and we will be doing work that relates to objects in the Amherst History Museum collection. For those of you who don’t know, the Amherst History Museum is in the Strong House next to the Jones Library. During my museum tour I was struck by many of the objects I saw, but one of them stood out and that was a banner which was made by the North Congregational Church members to recognize their fellow congregants who served in World War I. On the white and red banner there are twelve blue stars representing men who served during WWI, three blue stars with red crosses representing women who served and two gold stars representing men who died in service.

Seeing the banner started me thinking about the veterans of Amherst who were not part of that congregation. How many of them were there? Were they honored and memorialized? Then I began to think about how hidden our vets can be today. I wondered if I were to make a banner the same size and shape as the one in the museum, and if I sewed blue stars on it to represent all of the veterans from Amherst both living and dead how many stars I would need to sew? Would the flag be full? If I included veterans from all the major conflicts like the Civil War and World War II, would I run out of room and need to make another banner?

A few months ago I asked Steve Connor for help. I asked him, how would I go about getting the number of veterans from Amherst who have served? He said, you start asking people. And so, as of today, I am asking you for help in answering the question - who from Amherst has served?

This is an art project and an exploration of our history. This as a learning project for myself and for the Town of Amherst. This is a project that will develop as I collect names and dates, but I am hoping to have it hanging in the museum by late spring. It won’t necessarily be finished, but I will add on to it as I collect names. If you are interested in having a star sewn on the banner to represent yourself or someone you know, or you are able to help me collect names of Amherst veterans, please come and talk to me after the event.

Amherst Veterans Banner - If you consider yourself “from Amherst” and you served, then I will sew a star for you. For more information please go to Bedscapedesigns.com.

Past Events I should Have Posted!

Bedscape Designs is being sold at All Things Local

Please support our local store - All Things Local and at the same time check out my quilted cards, small quilts and a few larger ones too! Check out their link for open hours.